5,995 Drunken Monkeys have escaped captivity, and managed to track down a Lux V-class in disguise. They are out on the town but need your help in unlocking a vast array of luxury venues and special events throughout the greatest cities in the world, including London, Miami, Monaco, Paris, Mykonos, New York, Ibiza, St Moritz and many more…

During their time in captivity they made many fantastic contacts, ones they can trust and call-on whenever needed, these Monkeys love to show-off and meet their friends whilst making sure they don’t face difficulty getting access to the most desirable venues and events, whether that may be a trendy restaurant in a world famous city or the most exclusive sporting event. Many of these contacts have promised to help them on their journey and grant them exclusive VIP status including privileges in the form of up to 20% – 50% off of their total bill when dining and networking with them.
Before escaping they convinced their most skilled contacts to create a reliable, yet flexible concierge service which allows them to travel anywhere in the world, by land, air or sea, in style, if they need accommodation, that’s not a problem either, they have hotel owners up their monkey sleeve.
For them, networking doesn’t and won’t stop until they reach a destination which keeps them safe from any further captivity, this will be in the form of their own hospitality metaverse, consisting of restaurants, bars and private members clubs and more. They want a way out and they can’t do it without your help.

The Roadmap Towards Providing A Better Living Experience With Unimited Access For Only 5,995 VIPs

March 22
Step 1
Planning The Great Escape
The Monkeys are a little tipsy and planning their escape, they are gathering clothes and accessories to make this achievable.
April 2022
Step 2
Networking to create the greatest concierge
The disguises are in place and their plans are set. They are networking together to create the greatest concierge service in the land featuring Bars, Restaurants, Hotels, Sporting Events, Private Members Clubs, and Travel.
April 2022
Step 3
1,000 Monkeys Are Out
Private Round - 1,000 Monkeys are out and their closest, most trusted contacts will be ready to pick them up as soon as they escape to keep them safe whilst waiting for their friends.
Q3 2022
Step 4
The remaining 4,995 Monkeys breaks free

The remaining 4,995 Monkeys have broken free, they are on the run, but not for long, being collected one by one as they escape.

Q4 2022
Step 5
Welcome To The D.M.M.C Concierge Service
They say the best plans come together over a drink or two and these Monkeys were not wrong, they have all escaped and they now have access to the most in-demand hospitality platform on the planet, the D.M.M.C concierge service. Networking together in exclusive destinations across the globe and planning how they are going to create their own private member clubs in a variation of different metaverses, but first they must buy the land….

Q2 2023
Step 1
Drawing up plans for the Monkey Fund
From the funds which have been accumulated during their escape the Monkeys are drawing up plans for the Monkey Fund, this includes a partnership with some older Ape’s they met previously who own www.metaversalrentals.com. Getting access to this desirable land will not only grant them planning permission to allow them to build their own private members clubs throughout multiple metaverses including their own, but also create a passive income for themselves through land flipping, and renting out unused plots to in-demand tenants.
Q3 2023
Step 2
Networking to create the greatest concierge
Land has been chosen and ink is about to touch the purchase agreements but these Monkey’s are mischievous, during this time they have been networking to create their own token (NUTS) to drive the Monkey DAO, a incubation fund for early stage digital asset projects which wouldn’t normally be accessible unless you a) had the contacts which they have and b) a minimum of $50,000 to subscribe, they have both! They have travelled the world and executed on the finest model which will make them lots of passive income over years to come as profits from the performance of these private and seed stage investments get shared amongst the community within the Monkey DAO staking pool. They are in a race against the clock, The Angry Monkey Wives have now caught wind of their escape and are not happy to find that they have been out on the town all this time!
Now we know why they escaped and why they're naming their token the NUTS!

5,995 Unique NFTs comprised over 3 tiers of membership, all with one goal in mind, escaping captivity! 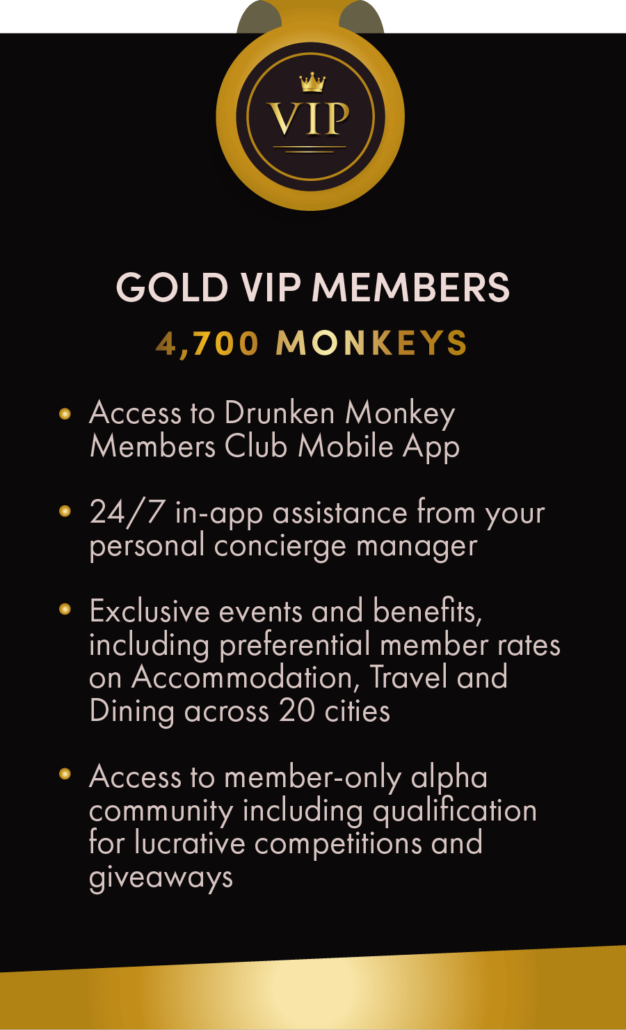 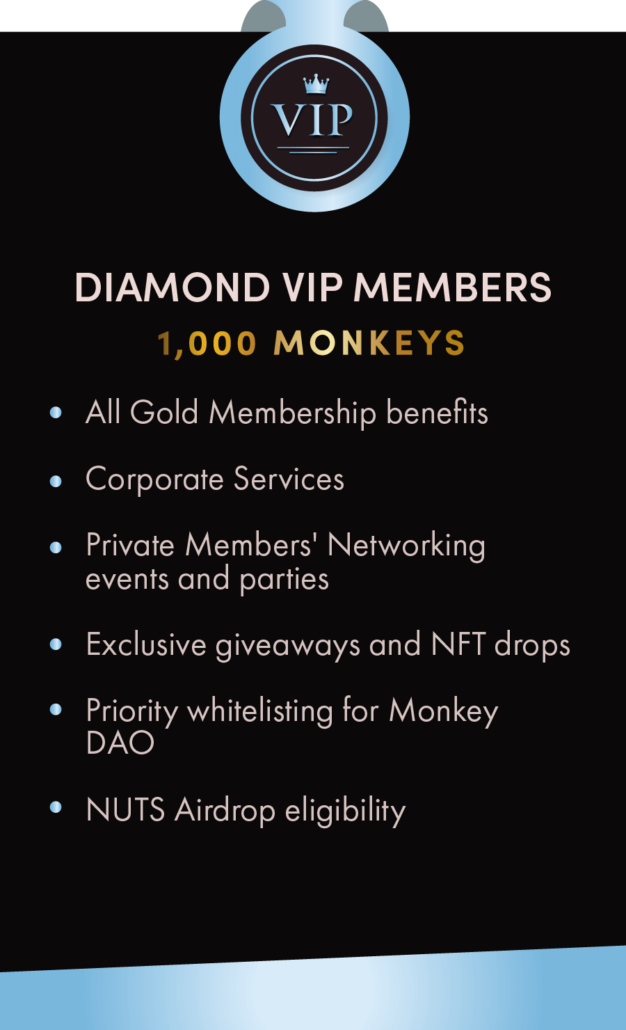 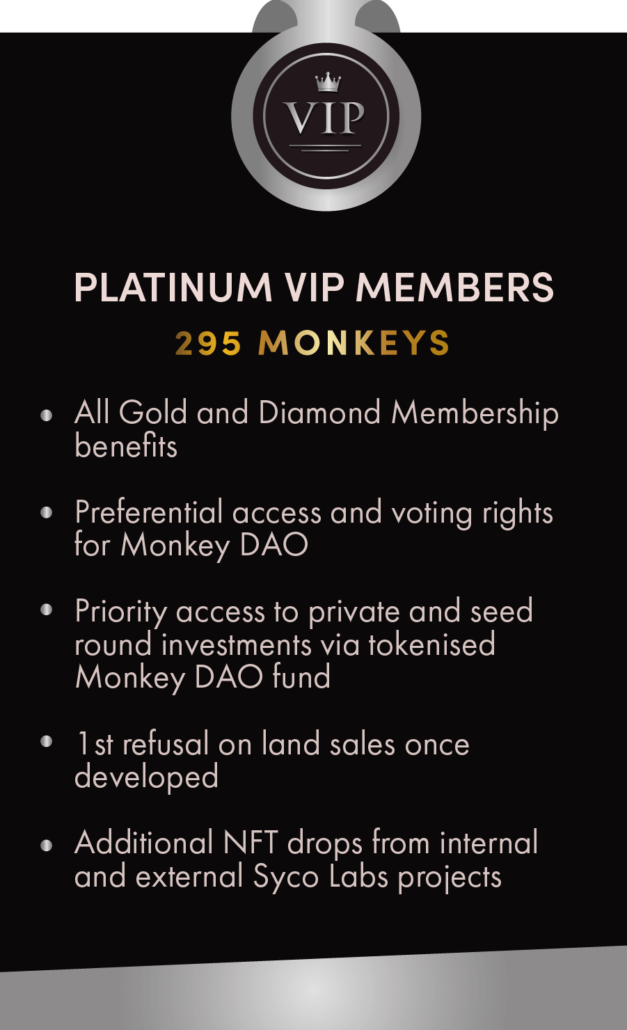 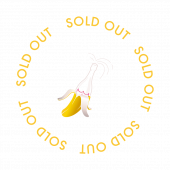 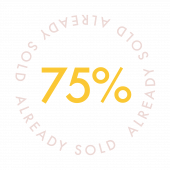 You will need to provide your biographic information such as name, age, gender, job title, annual income and so on.

Our collection consists of 5,995 unique Drunken Monkeys ranging over the three tiers of rarity Gold, Diamond and Platinum.

We have a fair minting policy whereby our community can gain priority access to purchase via our private, application and public rounds and have the chance of minting any of these three tiered NFTs at random.

The entry price for each round has been based on the Gold tier, strike lucky with Diamond or Platinum and you’ll be going NUTS!

Uncover a world of possibilities

The desire for experiences through ownership. We aim to deliver exceptional services to bridge the gap for all our members all the way through to our affluent members. We are delighted to present to you the first 20 destinations covered by our luxury global concierge service.
View All Destinations

Welcome to our exclusive concierge club

Our memberships grant you access to our exclusive members club which provides concierge services across three continents.

Our mobile app is now live on iOS and Android!